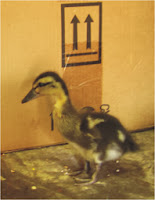 Once Spirit had done his round with Lucky happily in tow he dropped the box back off and tip-toed back to bask in the sunshine.
Posted by Unknown at 11:12 pm