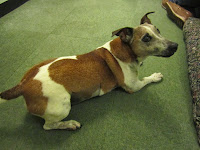 Though Chico showed no signs of being ill again, a small gland around his neck re-appeared in the spring of 2015.

The vet decided to play it safe and found that the lymphoma had slightly surfaced again. Chico seemed to have no idea of the situation; jumping around with his normal zest for life.

It was decided to put him on a low dose of chemotherapy and not so often so as not to upset his system too much.

I have seen him more often and I am sure he is wondering what all the fuss is about but enjoys the cuddles from me never the less.
Chico’s coat is not so spotty, reverting to his old self and he is still giving Harry the run-around with three or four bowls of food at his command for each meal.. he even turns his nose up at non-organic chicken now, preferring the organic choice.....QUITE RIGHT TO!