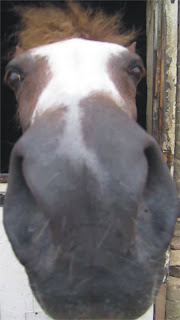 Okay, I've worked it out... I now know Spirit's old routine in the circus, I don't know why I didn't see it before what with the Carpenter episode, then the ease at which he dismantled the electric fence, the demolition of his brick built stable, the way he stands on his back legs as if climbing a ladder.
The final piece in the puzzle happened when Jessica was mucking out the stables as she usually does; Blacky's first once he is in the field then Spirit and Banker go out whilst she does theirs. On this occasion, once Blacky's had been done Jessica was not feeling so good, she decided to go indoors for a cup of tea before letting Little and Large out. As she crossed the yard away from Spirit there was a crash, crunch crunch from behind her, turning to see she found Spirit looking terribly angry at his stable door and a hole in his wall where once a brick was. The brick was now in plain view just a few inches behind Jessica.... The little rascal was so incensed with Jessica for leaving him in, he pulled a brick from his stable wall and threw it at her!

I can see it now: Spirit wandering around the circus ring dismantling and building brick walls, passing saws, making the lights go off by disconnecting wires and passing bricks up ladders.. He was a Builders Mate. Next time I see him I'm going to see what he does with a paint brush!