Pickle the Bull Terrier battles on 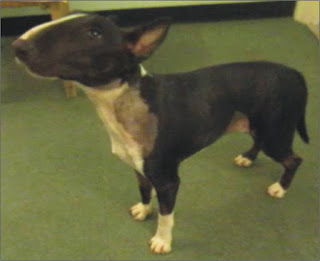 I have not seen little Pickle for a while now but have an update from her mum:

She is going to the toilet less at night now, so Jenny gets a bit more sleep! However it is still loose.
Despite the continuing bowel trouble she is eating for a horse and has managed to put 2 kg of weight on in the last week and has not thrown up.
The patches of fur that were shaved for tests have not fully grown back yet, which can also be a sign of ill health.
She is still a happy girl, playing and going for her walks, definitely going forwards not backwards.
I hope to see her soon.

Wherever Spirit roamed, Banker would be by his side as a wonderful calming adult influence, Banker would warn Jessica if he was at the Goose feed or had escaped the confines of the field, they had a bond between them that went beyond companionship,  he was the patriarch of the pack but most especially of Spirit. He had an amazing influence on so many people and horses in his 34 year longevity including his incredibly loving owners. Whilst all were loosing their heads around him Banker remained steadfast and reliable, he was indeed the Old Major that had been on this plane a few times before. Not much surprised or shocked Banker, he was Jessica’s rock.


Two years ago on 12th November Banker collapsed in the field with life threatening chronic colic, Jessica was by his side the whole time whilst someone ran to fetch the vet. She soothed and talked to the old boy praying he would be alright, it was looking bad as he could barely move. Jessica would never want him to suffer and knew she had to give him permission to leave this life if he felt it was time, so with tremendous strength she told him he could go if he wanted to, that she would be sad but okay. All of a sudden Banker had an amazing jolt of energy and pulled himself to his feet as if exclaiming ‘he was not done here yet!’

Banker’s previous owner travelled some distance to see him for a day each year as indeed she did on Sunday 11th November this year, they all had a wonderful day in the sunshine, grooming his teddy-bear winter coat and catching up on cuddles. Banker was chatting away the whole time, happy to have his two loving ladies pamper him. Jessica was so pleased with him she had commented on how he had the look of a foal about him.
At 3am the following morning something woke Jessica, she opened the window to check on the boys but only two heads appeared at the stable doors: Banker was not responding. She could hear his feet pounding the floor and the sound of straw being thrown around. Jessica knew at once he was in trouble, as she rounded the corner to Banker’s stable he staggered towards her: the colic had struck once more, two years to the day. This time he was not going to recover, the vet was there very quickly and Banker passed quietly in the early hours with Jessica by his side and his pals nearby.
I visited Jessica, Spirit and Blacky later that day to offer my support; Jessica and I were worried about Spirit’s reaction to losing his best friend, we could not have been more wrong; Spirit galloped for the first time in years with his tail in the air, racing into the field with Blacky as if Banker was by his side. He was sprightly and happy, Blacky was the confused one. As a healer I have often felt the complete understanding and almost dismissal of dogs that have lost fellow dogs, it is an understanding of death that I struggle to find in other animals: they know the deceased has simply moved on to the next life continuing on their journey, there is no remorse or sadness, they are almost happy for the deceased, it is so refreshing to feel. That day I watched Spirit play in the field after his best friend had died was just the same; he was fine with the situation, almost excited for dear Banker. Spirit could feel Banker’s soul close and free and he was happy for him.
Blacky was not so sure of the situation, he is a sensitive soul that has a need to know how, why and where everything is. Though Blacky could feel Banker watching from the trees he did not understand Spirit’s euphoria.

I think Banker will be keeping a close eye on them all for some time to come.
All the best dear boy, I'm privileged to have met you in this life and I have no doubt you will continue to be a strong presence. 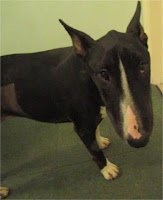 I saw Pickle Lilly Friday; she is looking good, not right but good. She trotted into my room with her warm coat wrapped around her thin body and proceeded to sniff every corner of it, (the room that is) investigating all the other smells of cats and dogs that had been before her. The sniffing was so significant that I asked if she had lost her sense of smell with her illness. Jenny thought about it for a while then agreed that she was sniffing far more this last week. It could be sense of smell returning or simply feeling healthier and more inquisitive, which ever it was she was happy to sniff away.

She is completely off the steroids now, with no nasty reactions and she had one motion that was solid!!! then back to loose, but it does show her body can do it. She still has this strange two week cycle throwing up over two days then fine again, it is like a two weekly detox. Despite all of this she has managed to put a little weight on and must be feeling a bit better as she is being naughty at home.

Once again I struggled to keep Pickle still for her healing so Jenny held her whilst I ran my hands over her head and down her body. I was drawn more to her head and its connection to her body than directly to her abdomen. As I kept my right hand on the back of her head the left one acted as an electric pulse running down her spine to her tail, feeling the strength of the connection between the two. As the distance between them grew I could feel the connection weaken. This is where I waited as the energy pulsed and the connection became strong again as if repairing a broken wire. I did this several times until I could feel a good connection from her head to her lower back. Finally I placed both hands on her poorly stomach to help sooth the troubles.
At one point during the healing she did lie down but it was a ‘red herring’…. As she attempted to wriggle her way across to the door and out of our reach! She never fails to make us laugh.

I am sitting at my computer listening to the fireworks explode around the house and hope your pets are coping with it as well as my two cats asleep in front of the fireplace. If they are not; try to put yourself into a calm, relaxed state, knowing all is well then pass your feelings on by stroking them at a slow, calm pace. Slow your breathing down; imagine you are the animal; carefree, relaxed and safe. Use your feelings to promise them all is well until they believe you. Good luck!