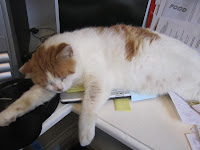 Poor Charlies fits became more frequent, I tried ‘rescue remedy’ which had a short term effect, any healing only seemed to exasperate it. We could see a fit start by his strange grooming so we were forever telling him ‘NO!’ which mostly stopped him for half an hour. If he was not able to stop we would have to put him in the garden to cool his skin, or on occasions watch as it manifested into a fit. The use of a small water pistol would distract him from his grooming but the poor thing was being squirted all too often.

I then remembered Richards wise words… ‘look up Feline Hyperesthesia on the internet’ I did and to my surprise I found videos and comments of cats fitting just as Charlie does, though Charlie seemed to be much worse. Digging deeper only brought me to a dead end; the general opinion of this problem is that they do not know why it starts or how to treat it, but they do know it seems to happen in middle aged cats!

This did not deter me; I felt a challenge coming on. I was sure that between Richard Allport and I we can control big Charlies troubles.