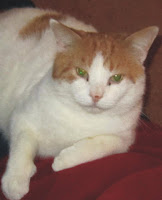 Having decided we were going to keep Puss Puss there were two important things that needed attending to straight away: first and most importantly, have him castrated, to leave him entire at the ripe age of six would be asking for trouble especially with Harry cat around. The power struggle between them was going to be bad enough even on equal terms and Puss Puss trying to settle in a new home with new smells was more than likely to prove irresistible to a spray here and there. Castrating the poor fellow would not automatically stop him spraying but it would help.

Secondly: change his name! I refused to continue calling him Puss Puss. Nick immediately thought he looked like a Charlie so from then on he was called Charlie Puss Puss to get him used to it.

Now all we needed to do was persuade him into the house and down to the vets. Over the next week or so he became a regular visitor to the front door, I would sit with him whilst leaving the porch door open into the hallway but first I had to move Harry cat into the store behind a closed door to protect him from this street bully that was entering his home. I chatted to Puss Puss Charlie telling him his new name and sending him calming healing from an arms length. He started to trust me (if only he knew what was in store for him!) allowing me to stroke his chubby cheeks and ginger ears, he even kneaded my jeans a couple of times.

The under weight ginger tom was becoming a barrel shaped blob with all the food he was getting from the neighbours and us. Julie had told us he used to eat three large tins of cat food a day!! I decided worming was also on his menu as soon as possible.

It was not long before Puss Puss Charlie was regularly coming into the house but would freak out if we tried to shut the door behind him, luckily it was a warm part of the summer and I let him come and go as he pleased with the front door open. He never stayed longer than an hour, other food stops to visit no doubt. One day my precision manoeuvres with Harry cat did not go as planed resulting in hackles, spitting and hissing with a finale of Bambi like legs scuffling across the laminate floor as they both tried to get a grip, running on the spot before shooting off in opposite directions. Harry spent the remainder of the day ears at attention, eyes wide peering around every corner of the house before daring to move. It took him some time to accept my apology and give me a cuddle.
www.helenthehealer.co.uk
Titan's Tale - Kindle / PC book