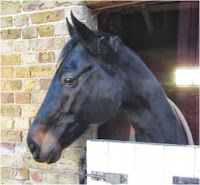 Blacky horse is a fine figure of a thorough bred race horse, with the edgy temperament that goes with race horses, so taking him from the well oiled environment of a racing yard with long fast gallops and single minded goals of reaching the finish line first to a wholesome, friendly yard with ponies and cobs for neighbours was no mean feat for Jessica. She did wonders to turn this speed machine into an elegant dressage boy. Her knowledge of all things horsy, her keen awareness and amazing intuition allowed them to work as one entity in the ring.

Along the way Jessica worked out Blacky’s foibles, trying hard to ease him out of them, including his innate fear of sheep!, yes I did say sheep. Even if they are in the furthest field from him he will spot them and go into a paddy so when he was rushed into the Royal Veterinary College with a cut on his leg and was about to be taken past a couple of sheep all trussed up in their walking harnesses he made it quite clear he was going nowhere near them….. vicious fury creatures that they are! The route was soon changed and although he could occasionally hear the sheep he could not see them.

One of his other strange enigmas is whistling men.
He can hear them from the bottom of the drive and again will have a paddy.
The farrier soon learned to stifle his happy little whistling tunes as he worked, else he would be retrieving a crazed race horse on a manic high.
We sadly feel Blacky had a whistling groom at one of his old yards that was far from nice to him.
I often joke with Jessica wondering what Blacky would do if he ever saw a whistling sheep!

Just as Jessica thought she had every one on the yard trained not to whistle around him, she found herself in Blacky’s box at the end of the day, all nice and calm with the usual radio on for him and his pony friend, Spirit, only to hear the first few moments of Whistling Jack Smith emanating from the speaker… Blacky’s ears went back his neck stretched like a giraffe and the white of his eyes appeared! Panic set over Jessica as she found herself pinned to the back of the box trying hard to calm the mighty black beast whilst grappling for the radio. She saw her chance and took it, gliding past his prickly shinny coat for the exit, just in time before he threw himself around the box to Jack Smith’s whistling tune of The Happy Wanderer! 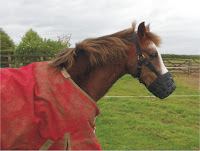 Posted by Unknown at 5:08 pm No comments:

Swept away by the vet: Spirit, Circus pony

The Vet arrived with his x-ray machine to be greeted by Spirit standing on his step and looking bright, he could not believe his eyes. Though Spirit did not pull his coat off he was rather feisty.

There was obvious improvement as Spirit was led on to the yard and once the bandage was removed to investigate and x-ray, Spirit took his chance and headed for freedom…. After days cooped up in his box with a stupid heavy bandage on his foot he saw his chance and was off to the field with renewed vigour, Jessica and the Vet in hot pursuit. The dreaded broom was needed to brush him back to the x-ray machine. Just as they thought they had him pinned in, he found a gap and was off again. I don’t think the Vet could believe it. The third attempt was successful, Spirit’s foot was re-bandaged, though not as heavily this time and he was led back to his Stable.

The x-ray was looking a little better but the Vet was trying not to be too optimistic, ‘He is not out of the woods yet Jessica’ he said but for the first time during Spirits ordeal he did smile and gave Jessica a re-assuring pat on her shoulder. He was to return in two weeks time.

Does any one else find the broom a handy tool with horses?

Posted by Unknown at 8:27 pm No comments:

Spirits healing sessions were intense to start with, it seemed like the initial sessions were to push and pull things about in that little foot, after which the healing became more soothing.
A second problem now arrived; his box rest gave his stomach little movement reducing his droppings to small, hard pebbles… not at all good for this ginger fella. I was spending as much time, if not more healing his stomach as I did his foot, the next few days showed better droppings and a happier Spirit.

A few days later the foot had started to turn back the correct way and he was putting his weight on it, albeit shakily. Jessica and I so wanted this to work for him we dare not say how much better he looked, but we could both see it in him. The regular bandaging from his friendly farrier (with no sedation) revealed less and less pus as the week progressed until the day before the Vets visit when there was no pus at all! Things were looking better for this mighty pony.

On the Vets previous visit he told Jessica that he wants to see Spirit standing on his stable step and biting him the next time he visited.
The evening before D-day, against all the advice I had given Spirit over the past months, I tried very hard to encourage him to use those fangs by pull the Vet’s coat off when he visited the next morning!

Posted by Unknown at 4:11 pm No comments: