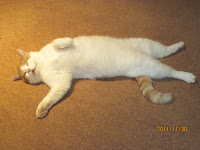 One evening as I sat with him in our lounge he was under the coffee table with one of his front paws on the top of my foot. He had been quite calm for a couple of hours when his manic grooming started up again. I tried to distract him by tapping my foot up and down, therefore moving his paw up and down. He stopped grooming and watched the motion, as I continued it seemed to send him into a trance-like state which led to him falling asleep.

An hour later he woke and started again, once more I tapped my foot and his, up and down rhythmically and he fell asleep. My brain started to work overtime: perhaps the rhythm was changing the manic rhythm in his head and preventing a fit? Maybe sound had the same result. It was getting late, my husband had long gone to bed but I now had a ‘Bee in my bonnet’ and needed to check this out. I retrieved my husbands’ metronome, wound it up and placed it in front of Charlie. As its pendulum swung back and forth with a loud ‘Tick Tick Tick’ at a speed of 60 beats per minute, Charlie was mesmerised by it. He lay directly in front of it watching and listening, he was calm but not sleeping: I changed the pace to 30 beats per minute and watched him fall asleep!

I was so pleased with myself I nearly woke Charlie with my laughs. Could it be this simple, the answer to all those long suffering cats and owners: a metronome? After 20 minutes Charlie still slept but I had a problem if I wanted it to last the night….. it was a wind up metronome that only lasted half an hour and I was not getting up each time to re set it.

I tip toed into my Step daughters’ room and found the ‘Mr. Bean’ alarm clock I had bought her a year ago, it had a wonderful loud tick (not so wonderful to the person sleeping next to it). I replaced the metronome with Mr. Bean…….. It had the same effect. Dear Charlie slept soundly all night.

I came across this picture of Spirit the other day and was surprised how much he has improved in the last year.

Some times we forget how bad things were until our memory has been jogged, take a look at him now:.........

Posted by Unknown at 5:27 pm No comments:

I met a lovely new dog called Jenny, along with her owner, Paula.
Jenny dog is of mixed race and suffering with Addison’s disease and pancreatitis  (http://www.2ndchance.info/addison%27s.htm).

On top of this her owner Paula has a stressful life which cannot help but rub off on Jenny.

Her conventional vet and her homeopathic vet are treating the Addisons which seems to be starting to kick in but Paula is worried about Jenny’s lack of energy and stressed state. Richard Allport suggested she bring Jenny dog to see me.

Paula was quite up-front from the start she said ‘I’m not sure why I am here, I told all my friends I’d probably be in and out in five minutes as there is no way Jenny will sit still for healing let alone react to it’. Like a red rag to a bull for me, I gave her a wry smile and said, ‘well lets see what I can do shall we’.

Jenny was plodding around my small room thinking about sitting down on numerous occasions then off she would go again. Instead of pinning her into a corner I decided to work on her from a distance first, just to slow her down a little: I concentrated on her mind, giving out relaxing, safe energies as she grew more and more weary. Within a couple of minutes she had settled on the floor by the door where I joined her.

I placed my hand on her head and started my usual healing method. I could hear and see the shock of Paula as dear Jenny succumbed to the healing energies.
By the time I was finished Jenny dog was out for the count on the floor, gently snoring, Paula was thrilled and amazed adding ‘My friends will not believe it!’ It took us a while to wake Jenny up to go home.
I have since seen her a couple more times and she is doing very well.

The Vet visit was good, he told Jessica ‘Carry on doing what-ever it is your doing, it seems to be working and Spirit is determined to survive, call me if you need me’ Frankly he could not believe Spirit was walking on such a badly positioned Pedal bone, he was defying all practical knowledge.

Not out of the woods yet, Jessica decided to cut down on Spirits Polos during the course of the day, as sugar is not at all good for his condition. When his morning Polo turned into a carrot he was most indignant, throwing the carrot out of the door and shooting an evil stare at poor Jessica, all she could do was to apologise.

As Jessica went about her daily routine of mucking out the stables and sorting their feed among many chores, she let Spirit loose on the yard to tip-toe around the concrete as he wished. He was un-likely to dash off anywhere in his condition and there was no X-Ray machine or Vet to run from.

Content that Spirit was absorbed in nibbling the tiny tuffs of grass from between the concrete she made a three minute dash around the back of the stable block to dispose of the droppings onto the muck-heap. As she returned something told her to hurry….. sure enough, there was Spirit’s back-side protruding from the feed shed, having thrown his head, seemingly recklessly around the shelves, throwing all-a-sundry around the floor. Alas, the mess was only a distraction; his true intent was the FIVE pack of Polos at the back of the shelf! On hearing Jessica’s imminent return his nasty nashers worked in double-quick time to obliterate the entire FIVE pack of Polos, minus their wrappers before she could do anything about it!!!

Haaa, if you think you can keep me from my Polos you have another thing coming Miss Jessica!