Jessica’s farrier was amazed at Spirits progress…once he had tricked him out of his stable!
It seems Spirit was in one of his stubborn moods the morning the farrier was due again, he was not coming out of his stable whilst HE was there, they tried all tactics that would not stress him for fear of setting off the laminitis but he would not come out to play. John was about to leave in defeat when they tried one more strategy: he packed up his tools, placed them back in the car and said a loud goodbye to Jessica. As he pulled away Spirit came hopping out of the stable all chuffed with himself, Jessica closed the stable door behind him whilst John did a U turn with his car returning to deal with the cunning lad!

John was indeed amazed at Spirits nimbleness; his knees and feet were lovely and loose no troubles picking each one up to treat him. Now he has shiny short hooves to go with his shiny teeth.

The Cushings medicine (which he takes from a syringe like a baby), healing, natural remedies and Jessica’s love and devotion have finally paid off, Spirit is a different pony from the one I first met.

Jessica asked me to check on Blacky’s emotional state after a potentially nasty incident the other day:  It seems Blacky was spooked by a leaf or a bird or something just as inane whilst in the field which sent him at a full gallop far too close to the fence where he managed to entangle his tail in some barbed wire thus frightening him all the more. In a blind panic, thinking the wire was chasing him Blacky then galloped round and round the field at full pelt trying to escape the horrid wire chasing him. Worried the wire would catch his legs, Jessica could do very little to help the situation, simply talking calmly to him each time he passed her.

Spirit and Banker saw their chance to escape the mayhem through the now unsecured fence, making their way out of the field towards the yards. Jessica could only watch as she was unable to leave Blacky.  Ten minutes passed with Blacky still at full pace and no sign of the others, as luck would have it her brother arrived ready and willing to help. She told him to jog… not run so as not to spook Blacky any more than he already was, to the house to fetch some scissors, Polos and see what the other two were up to. Banker, though a little on edge with the upset of his day, was behaving himself on the yard, Spirit however was nowhere to be seen.
Blacky eventually ran out of steam and came to Jessica close to collapse with his head hung low, sweat over his body desperate for affection and wire in tow. She cut the wire free from his tail and was thankful for no real damage. After sorting Blacky she needed to find Spirit: the trail of destruction was easy to follow, up-tuned wheel barrows, feed buckets pushed around, brooms and tack thrown everywhere, the trail lead under tapes, through to the next yard on the farm and round several corners where sure enough there he was head on the floor munching away at the up-turned goose feed without a care in the world!

A kick-start for Pickle

Sorry to dwell on this subject again but it seems to be the main thing holding Pickle back from healing: Her motions started to be more solid during the week but she has since had a setback. She has been vomiting again and has gone off her food, only eating from Jenny’s hand. This seems to be a cycle for her, fine for two to three weeks then vomiting for a couple of days. She has been stable since last night so we hope is over this bout but motions back to liquid. The healing revealed excess acid in her lower stomach which is to be expected but it seemed more than normal.

Now this may seem strange but then I am!... I often come across people with either extreme fatigue syndrome and/or server in-sensitivities, when I give them healing it feels like their head is working fine, their bodies are working fine but they are not working together, there is no synchronicity between them. The healing I give is to try to re-connect the head with the body to work together again, almost like re-introducing the two, weird I know but it does seem to work. For example; the body is trying to tell the brain that it feels excess acid in the stomach but because the brain is not listening properly it sends more acid instead of dealing with the excess, a bit like the husband that is asked to watch the saucepan and just stands there watching as it boils over ‘you never told me to turn it down!’
Poor little Pickle feels like she has a similar problem so I placed one hand on her head and the other on her frail body, trying to kick-start her electrical pathways between the two again.

She is on the last couple of weeks of steroids if all goes well, once they have left her body she may feel better, I will let you know.

Posted by Unknown at 6:14 pm No comments: 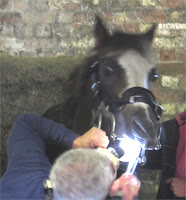 Pickle is not cross 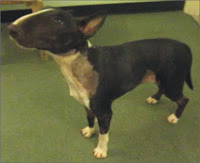 I have an apology to make to Pickle, I never have been very good with makes and models and I could be forgiven as poorly Pickle is only half her old weight at 12 kg... She is not a cross but a pure English Bull Terrier: sorry Pickle you're still lovely.

She is still eating loads but bowel movements still liquid and only gained a couple of pounds but it is a gain and not a loss which is improvement.
She did not want to settle down for her healing today, Jenny took her out to see if she needed to go but nothing. I caught up with her in one corner of my room at Potters Bar where she conceded but would only sit. The healing revealed an uncomfortable area high on her abdomen, not a definite spot, more of an all-over upset so I am hoping it is just the months of inflammation still healing. The Vets have done every test under the sun which showed nothing so fingers crossed for her. She is such a quiet soul, I have never heard a noise from her, just the occasional paw at the door when she needs to go.
Again, very little energy going into her neck which leads me to think the cause of all this may be sorted; now we need to re-build her.
She is on chicken, fish and the Vet's diet food and the steroids are still being reduced. She started on the slippery Elm remedy the day before so that may start to help too. Jenny tells me she is still in good spirits.

Posted by Unknown at 8:57 pm No comments: