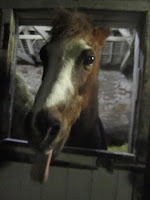 Spirit has been doing very well over the cold spell, he still wants to stay out in the field way longer than he should and puts up a small fight to stay but knows when he is beaten. A couple of times he has regretted staying out in the cold so long as he is stiff on his legs, hobbling out of the stable in the morning. A short stroll around the yard soon fixes him.

Jessica had been worried about keeping him in when it was really icy, ‘I’m sure he will climb the walls and dismantle his stable in frustration.’ Jessica said. What she did not appreciate was how Spirit had fallen in love with the two new ponies in the opposite stable! Most especially the little orange one with a white blaze, called Ebby; she is a lovely placid thing and smaller than Spirit. He has been dominated by two huge horses on the yard for years, now he can be the charming little gentleman that the two new girls adore… or so he hopes! Even when he is let loose to go to the field he would rather stay, gazing at the girlies.

He has even been doing some body building, as his muscles are bigger and more defined: You poser Spirit!