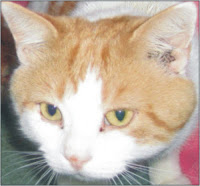 I came home from work one day to see Julie with her daughter and son-in-law standing at the corner of Puss Puss’ house looking perplexed. I noticed a cat basket on the floor as I approached them and Puss Puss enjoying a bowl of food beside it. They had found him a place in a sanctuary but were having trouble catching him. My emotions were mixed; happy for him to be on the first step to a new home but sad to see him go as we had started to trust each other. Either he was smarter than they thought or he was not fond of the Tuna Fish in the basket as he avoided it like the plague. I offered to help; they stood at a distance as I approach dear Puss Puss, I bent down and to my surprise he let me pick him up, I could hear the shocked voice of Julie’s daughter amazed that I had done so. His regular diet had given him a density I did not expect, his stomach  was solid and tight as if in spasm and though awkward in my arms, not knowing how to be held, he did not struggle. I attempted to pop him in the basket; he was a big strong boy and was having none of it, flipping round in an instant, running off down the alley way out of sight. They left the basket with me and I agreed to call them as soon as I could catch him.
Posted by Unknown at 5:37 pm