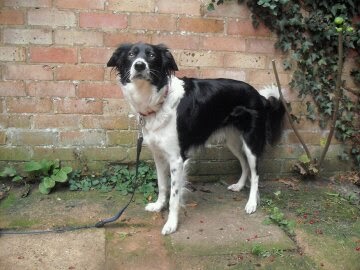 Stars 2nd visit came with a wagging tail, she was pleased to see me. Her owners explained how she was back to her old ways for 3 days after the last healing even doing a bit of playing with her sister Honey and her bad leg was better too.  Then she took a turn for the worse with sickness and diarrhoea, she spent some time at the Vets who was worried she would not survive another bout of it.

Star did seem to have more energy despite her setback. The healing went in well, no wind this time and she went off to see Richard Allport quite sprightly.

Stars 3rd visit came with very good news: her blood count was better but most importantly she had started to produce red blood cells at a rate of 7 %.


Richard’s remedies had been started for the last few days which should also be making a difference soon.

Star was much better in herself but still quite lethargic (not surprisingly). She had plenty of energy to give me a big cuddle though; Honey had to get in on the act too. We all settled on the floor for Star’s healing as calm descended the room. I was concerned that the healing was still quite strong in the usual two places on her spine as I had hoped it would not need as much by this time.


We had to wake Star up to go home.