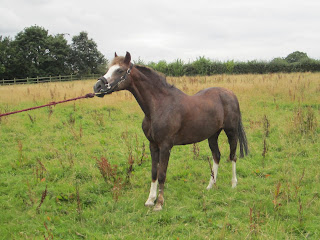 I spoke to Jessica today, Spirit is doing so well she is having to race him across the concrete to stop him getting in the feed shed.
He cannot wait to go out to the field once Jessica has secured the area with the electric fencing and in fly-free weather he gets up to his old tricks in order to stay in the field!

Jessica must bring him in before he eats too much grass which will aggravate any laminitis. The other day she managed to put a head collar on him, tugged at him, enticed him with carrots, walked him one way then the other, pleaded with him, shouted at him but he was having none of it: his front legs were stretched out to their maximum, dug in like someone at a tug-of-war. Suddenly Jessica thought she had won when he started meandering towards the edge of the field. Relieved and amazed at the sudden change of attitude Jessica found herself relaxing on the other end of his rope alas, Spirit was about to execute a cunning plan: he casually backed up to the fence, Jessica found herself struggling to move or even to think straight. She stood facing Spirit for some time trying to pull herself together as he nonchalantly carried on eating the grass. Eventually she realized he was practically sitting on the electric fence with no effect at all on himself as the shock ran through him, down the wet rope and was frazzling Jessica's thoughts!
Releasing the rope from her grip, Jessica regained her composure as Spirit eased himself from the fence. Now in a more determined mood than ever she managed to put the bright spark of a pony back into his stable where he belonged.