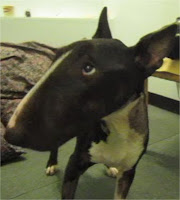 When Jenny brought Pickle back to see me I was pleasantly surprised to see her trot into the Natural Medicine Centre at Potters Bar (Pickle that is...not Jenny!).
She is now keeping down her food so the unsightly feeding tube in her neck has been removed. Her appetite is huge, better than it has ever been which is good as she unfortunately still has some diarrhoea, the amount going in is slightly more than is coming out, meaning she has put weight on. She was much more like her old self for the first time in months, Jenny said, even up to her old tricks and playing again. All-in-all a definite improvement.

Again, Pickle was a little wrestles to start with but when she realized they were going nowhere until she had her healing she settled down on the floor.
The energy going in around her neck was significantly less, indicating a change for the better, this time it was concentrated more on her sore stomach and bowl. She lay quietly for me, stretching out and sighing well. Once the healing was finished she would have been quite happy to stay there, as long as mum stayed with her.
She is still on steroids which the Vet is reducing slowly, each day is a fine balancing act between a healthy appetite, diarrhoea and the steroid intake. I asked Jenny if she had heard of 'Slippery Elm'. I know...it sounds disgusting but the opposite is true, it is a natural herbal remedy that helps sooth the stomach. It was a remedy Jenny had used before on herself but completely forgotten about, she was going to try it on Pickle.
The thought also crossed my mind of a possible wheat allergy, maybe something to look at once she is back to strength.