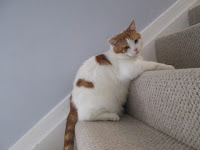 Charlie recovered from his minor operation well and seemed to enjoy being in the kitchen for a while. He knew how to use the litter box and loved meal times, he took to rubbing against my legs when I was preparing his meal and even allowed me to stroke him. It was during one of these rituals that I noticed how sensitive his lower back was when I ran my hand along it; he would spin around to see me off with a peculiar twist of his neck and strange meeow. We soon learned to steer clear of that part of his back all together.

Once Charlie was allowed back out, he had the front door entrance and exit so that we knew when he was in or out and Harry had his usual back door cat flap to use as he pleased. Charlie is a lovely fellow but I have to say he is a little dim; although he had lived in our street all his life he (luckily for Harry) could not figure out the back garden of his new home, sitting patiently instead at the front door until he was let in.

We introduced Harry to Charlie very carefully; they had seen each other through the glass doors but not spoken. Surprisingly it was not the giant white and ginger beast that had the hissy-fit… it was Harry; and quite rightly so I guess, as Charlie was in Harry’s home! It was just a couple of minutes supervised time together at a time, until they managed to be in the same room with no swearing at each other, then we extended the time together. Harry always kept a safe distance, he was well aware of Charlie’s bullying ways on the street.

I was starting to think the two of them might eventually tolerate each other!