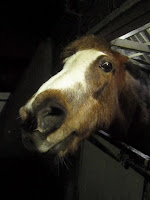 His knee was in need of some healing but not as much as his foot on the same leg. The foot was not hot but the healing was quite intense, I pointed out to Jessica where inside the foot I felt the healing was aiming at, she looked worried as it suggested the Pedal bone may have dropped, which can ultimately mean putting Spirit to sleep. I finished the healing by trying to convince Spirit once again that he was very much loved and should not worry.

When I give emotional healing to a person I will end by trying to pull any negative and wasted thoughts or emotions out and up from their head; this makes them feel much lighter, emotionally. It always fascinates me to see how the rubbish comes out in my minds eye: it can be in cardboard boxes, silver trays, pirate chests, paper bags even tea cups, each one seems to relate to the individuals past. Never though, have I needed to remove such rubbish from the head of an animal…. Until this day…. Spirit is so like a human in his mind that for the first time, I found myself removing unwanted thoughts and feelings from an animal; a spirited, lovable rouge with a fluffy ginger head. His rubbish came out in buckets but very reluctantly.

Jessica called the Vet in the following day who x-rayed the foot: it revealed the worst possible case of the Pedal bone having rotated and dropped but still had some hoof protecting it. The Vet could not believe Spirit was still standing. His foot was re-shaped to help him cope and wrapped in a huge bandage. When I saw how the bone had moved it made me think about Spirit’s past in the circus, the acrobatic posses he was made to do and wondered if he had been walking in such a manner for so many years it moved both the knee and foot into a bad position. After all, the knee was permanently wrong until we put it right, which in-turn may have made his foot move back to the correct position for natural walking but now the Pedal bone needed to catch up with it all!

Had we really done Spirit a favour by putting his knee right in the first place? ….. Yes, I think we did, it may be a long and frustrating journey but I hope that, as my guides said right  from the start; ‘it is the knee’ and that everything else will follow suit by getting better too.
The vet told Jessica if Spirit was no better by the following week she should consider having him put to sleep!!  Our biggest challenge yet was upon us.